Home > The territory > The Rocks

The territory of the Natual Park of Paneveggio Pale di San Martino is characterised, from a geological point of view, by the high diversity of its substrates. The sedimentary rocks emerge on the orographic left side of the Cismon River; while the igneous and metamorphic rocks of the Palaeozoic era outcrop in the western area of the Park.

The metamorphic base is constituted by quartz phyllites and mica schists outcropping at the Scanaiol, Arzon and Tognola Valcicolera Group; while the porphyries (ignimbrites) constitute the Lagorai range, from Tognazza-Cavallazza toward the west up to the limit of the Park, including the Iuribrutto Bocche group. About 270 million years ago there was an interruption of the magmatic activity followed by a partial dismantling of the volcanic reliefs through the erosion and subsequent sedimentation of the fluvial deposits on a vast alluvial plain. These sediments are represented today by the Sandstones of the Val Gardena constituted of layers of yellow and grey standstone with alternating siltosi and clayey levels. The main outcrops are near Paneveggio, downstream of Malga Juribello, Rolle Pass and Val Male. 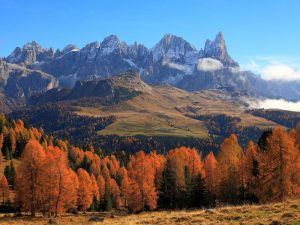 Because of a first marine incursion that occurred in the Upper Permian, the fluvial sequence was progressively and slowly covered over by a powerful evaporitic succession, defined in the lower part by gaseous evaporites alternated with varying amounts of dolomite and in the upper part by dark limestone of a relatively deeper environment with abundant presence of fossils, among which, the gastropod “Bellerophon”. Large outcrops are present on the road between San Martino di Castrozza and Rolle Pass and the Valles Pass.

The Mesozoic Era begins with a long period of alternation between marine incursions and regressions and the consequent deposition of an impressive succession of sediments in the environment of a closed sea, that however was gradually opening itself. This succession of sediments goes under the name of the Werfen Formation, constituted of a complex alternation of well-stratified rock, characterised by vivid colours (grey, red, ochre), with a thickness of a few hundred meters and very rich in fossils. They outcrop in Val Canali, Malga Juribello, Cima Valles and Punta Rolle. On the basis of the major dolomitic walls we find the Conglomerate of Richtofen, the Contrin Formation and the Livinallongo Formation. The Scillar Formation, composed of light-coloured dolomite blocks, was deposed in this region about 239 million years ago, reaching thicknesses close to one thousand metres: it is visible today in the entire eastern sector of the Park. Characterised by steep cliffs, gullies, spires and screes, it constitutes the Cimon della Pala, Monte Mulaz, the Vezzana and the entire complex of the Pale di San Martino.