Home > The territory > The traces of the First World War

The traces of the First World War

The First World War has constituted a tragic historic event which has involved and overturned the whole of Europe and which has touched the Trentino area in a direct way. Primiero, Vanoi and Valle di Fiemme, during the course of the war, found themselves to be the “front line” and some places within the Park were theatres of war. The Park has carried out some important interventions that have been able to promote the memory of the First World War and the valorisation of the territory, in particular of the sites linked to this conflict. It is an “open-air museum” consisting of itineraries to visit the trenches, walkways and forts.

Fort Dossaccio was built between 1890 and 1895 at the summit of the homonymous mountain (at 1,838 meters above sea level). Designed for long-distance combat, this fortification had the purpose of blocking a possible Italian invasion through the Val di Travignolo and the nearby San Pellegrino Pass.

During the First World War it was found very close to the front line but, despite this, it never played an active role: already in 1915 it was completely disarmed and transformed into a warehouse. Curiously, when the howitzers and cupolas were removed, they were replaced by the Austro-Hungarians with shields, concrete and tree trunks in order to deceive the enemy. Designed together with the nearby Fort Buso, it is formed of a main building that was a casemate in a pentagonal shape from where, from the north-east corner, a line of casemates is developed for about 200 metres.

The interior of the fort was comprised of a long corridor linking the lodgings and the living areas with the warehouses and the shelters for ammunition, placed near the 4 100mm howitzers in a revolving dome and the 4 120mm guns in the casemate. Next to the domes of the howitzers, also 3 armoured observatories were planned. The structure could accommodate, during wartime, up to 200 soldiers (together with 6 officers). It was equipped with telephone connection, optical telegraph with Fort Buso, drinking water (taken from a nearby glacier whose waters were conveyed into a tank) and electricity through a generator unit that was powered by petrol. In recent years, an important work of restoration and conservation has been carried out by the Autonomous Province of Trento and the Municipality of Predazzo, also to allow people to visit it.

The Mountains of the Cavallazza

The Mountains of the Cavallazza, Grande and Piccola, together with the summits of the Cime di Colbricon, have been the theatre of fierce battles for position during the First World War. Still today, the grandiose works scattered throughout these areas, are quite visible, many of them still in good condition. It is precisely the case of a series of stations dug into the rock located at the summit of the Cavallazza Piccola. In particular, one of these cavities has the entrance of the trail known as “Stoli della Cavallazza” and is equipped with a magnificent portal in porphyry in good condition, a portal that faces south, well visible even when climbing from the hairpin bends of Rolle Pass and it introduces a series of stations that look onto the opposite side. 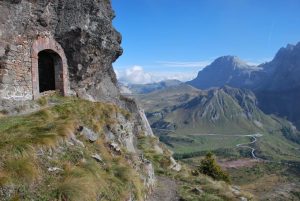 Numerous other cavities are present in the surrounding area, visitable and accessible from the trail built at the time to serve the different stations. The itinerary is inserted as a usable path, that can be included in the list of outfitted Alpine paths of the Autonomous Province of Trento. The trail starts near the station above the Paradiso chairlift and travels along the watershed ridge from north to south, until arriving at the Cavallazza Pass and here it joins into the R02 trail that is already entered in the Province’s list and under the management of the Park.

This mountain is one of the theatres of some battles of the First World War. It is located in a strategic position between the massif of the Pale di San Martino, the Lagorai and the Bocche-Iuribrutto group. 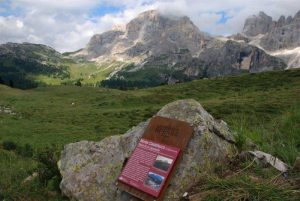 The dominant position with respect to the pass of the Dolomites of the Rolle Pass, has made the Castellazzo since antiquity, but especially during the First World War, a place of military importance.

There are therefore very many field reinforcements that were built during the First World War such as trenches, trails, barracks, spaces for cableways, deposits of ammunition. The upgrading and improvement of this area, curated by the Park, has involved carefully targeted interventions for the cleaning up of some works dating back to the First World War. A specific information sign explains in detail the wartime sites that have been recovered, by inserting them in the broad context of the Front. At the same time, the signs direct the visitors’ attention to the environmental values present on Mount Castellazzo and the need for them to be respected. The area is in fact in the perimeter of the Park, and is classified as an integral reserve, therefore with the highest degree of protection of habitats and species required by legislation. It also falls within a Site of European Importance provided by Natura 2000, in a Special Protection Area and in the IBA (Important Bird Area). 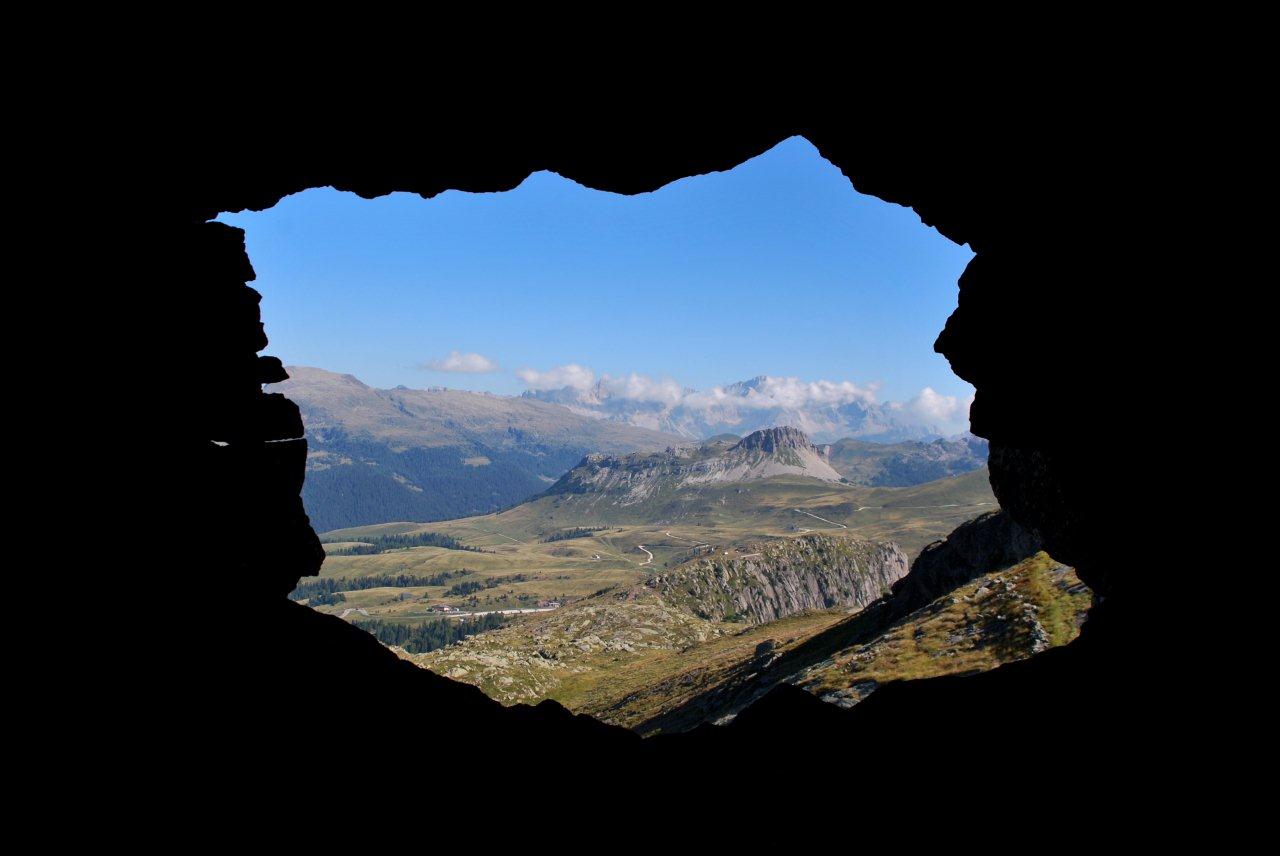 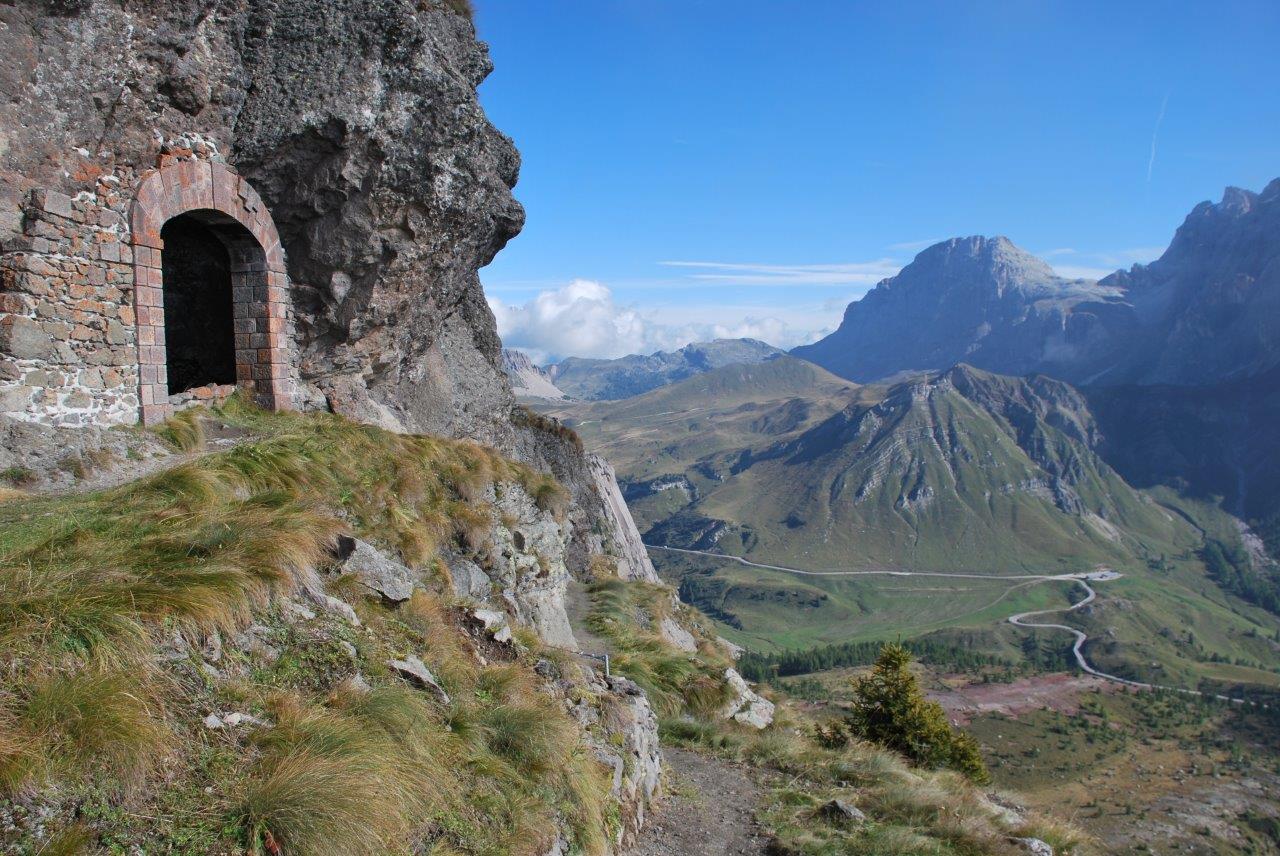 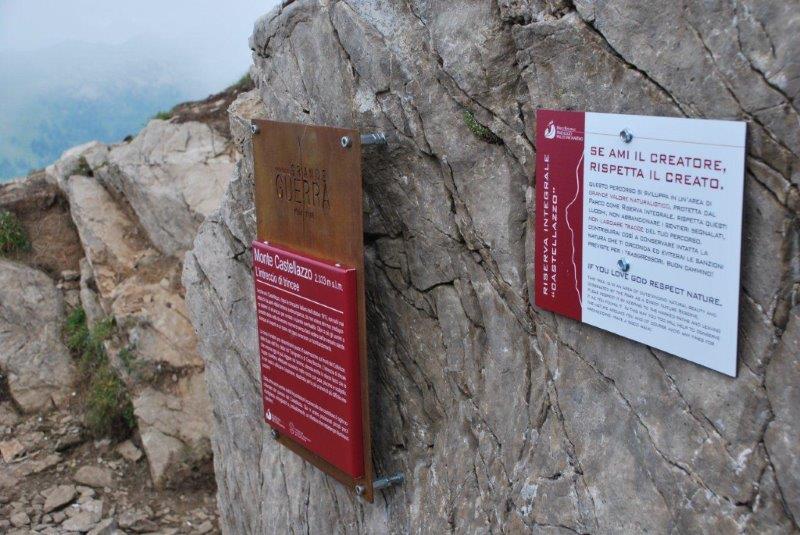 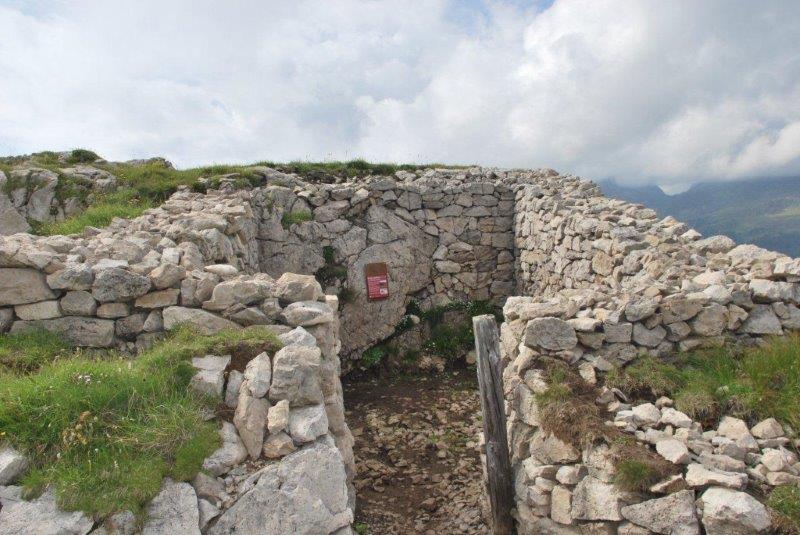 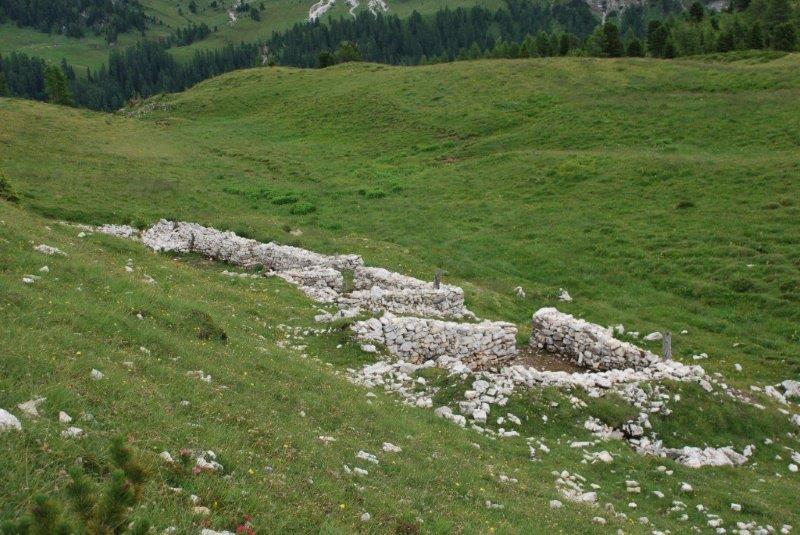 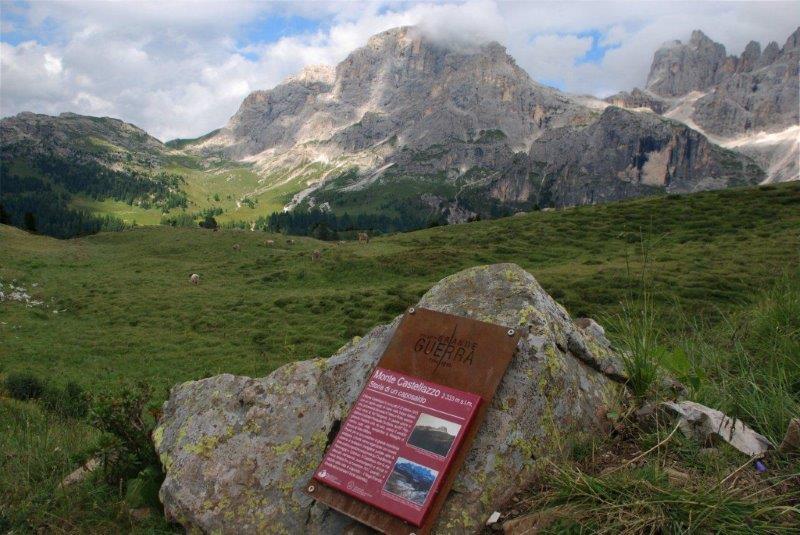